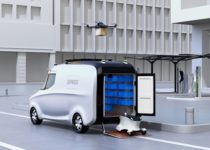 It used to be the case that every 1960’s vision of “the future” had us all zipping around in driverless cars – and mostly wearing silver. While the metallic wardrobe has yet to materialise, self-drive vehicles are already here – in fact, hardly a day goes by when we don’t hear about a brand that has been developing a new version of the autonomous car. However, while many assumed Ubers and private cars would be where we would see this innovation peak first, all the signs are that it’s actually in the delivery market where self-driving will become the norm more quickly.

Who is powering the self-driving revolution?

There are big name brands all over the world investing in autonomous vehicles, which have the potential to transform the deliveries market. Many companies are already testing self-drive vehicles around their local areas in America. Other companies have developing their own experimental fleets of self-drive vehicles, with the view to growing to a whole fleet of autonomous vans.

Why is self-drive delivery leading the way?

While many of the big global names have been working on vehicles to contain passengers, it’s actually the delivery market that has been taking the biggest strides. Startups are racing to achieve the first custom-made, public-road autonomous and electric delivery vehicles. We have already seen some of the first successful, autonomous deliveries, marking a new horizon in the delivery world, with the first being in California. Although it’s the law in California that a “safety driver” was sitting in the front seat, these first deliveries claim to have now been made completely autonomously.

How does self-drive delivery work?

Initially the design is for self-driving vehicles to use robotic lockers. This means that the vehicle is filled with lockers that contain the items to be delivered. When it is close to its destination, the customer gets a notification that their delivery is nearby and can then go and receive the delivery, unlocking the specific locker with their goods in using the delivery app or other similar method. It could certainly reduce the cost of deliveries but would it affect the service?

Currently, this method requires a control room full of humans who can help to deal with any unusual situations as they arise with the robotic couriers. There has also been only limited discussion of how an autonomous vehicle would make a delivery to a recipient who wasn’t there to unlock it and take the delivery in personally. So, there are still issues to iron out but self-drive delivery is still out front in the race to successful self driving for a number of reasons:

If you’d like to find out more about the best possible options for your own deliveries in 2018, contact a member of our team.


next post: Could outsourcing your deliveries bring these benefits to your business?
MENU